A survey, commissioned by Zoom in November 2021¹, indicates that select federal, state, and local employees have a favorable view of using Zoom. 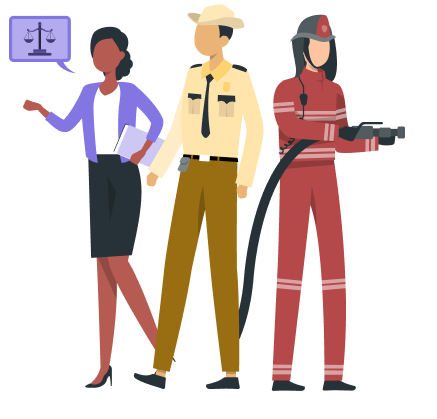 Government operations are not the same as 10 years ago, or even five years ago. As the public became more digital, many agencies had to find a way to help keep pace and opt for progress instead of relying on analog devices and legacy processes.

To serve this new online public while tackling mission-critical challenges, government agencies across the country embraced a new era of digital transformation, which was only catalyzed by recent widespread remote work.

With virtual collaboration at the heart of this digital transformation, video communications providers acted as linchpins for government organizations’ everyday operations. But with the adoption of video conferencing came questions around implementation:

But popularity wasn’t the only trait associated with Zoom. Ease of use and high-quality audio and video, followed by reliability, were most important to those surveyed — traits that more respondents believed Zoom possessed across the board compared to other providers.

Read on for a more in-depth look at the survey findings.

The popular way to collaborate? Video

The benefits of video communications

Respondents would select Zoom at work

The popular way to collaborate? Video

The modern public sector is embracing working trends emerging across other industries — reducing costs and redundancies with technology, enabling a distributed workforce, and extending constituent outreach through virtual means. As such, audio and video communications technology has played a role in turning these trends into a reality. In fact, when asked how they typically use this technology, 44% of those surveyed reported it was for internal meetings. 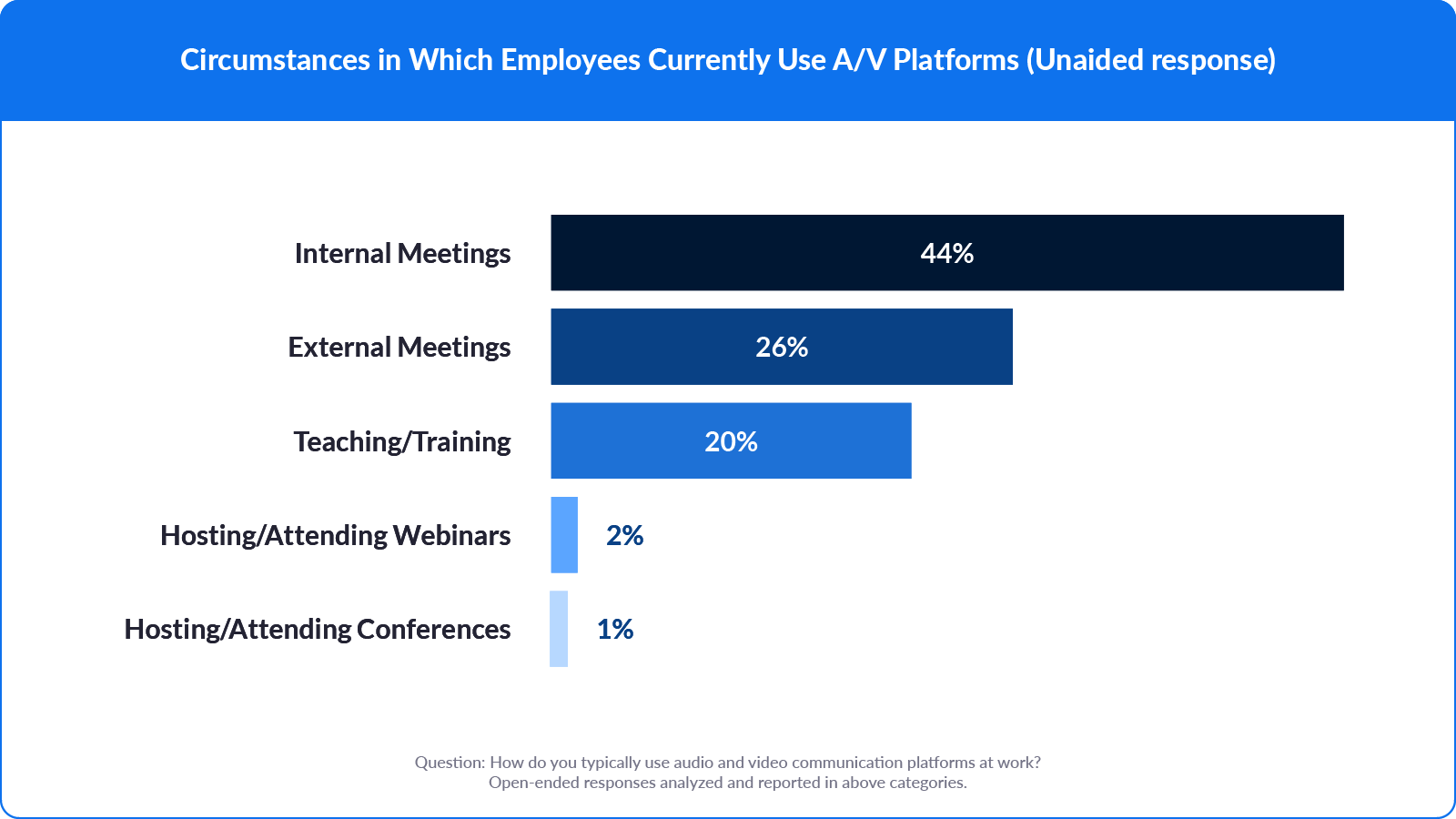 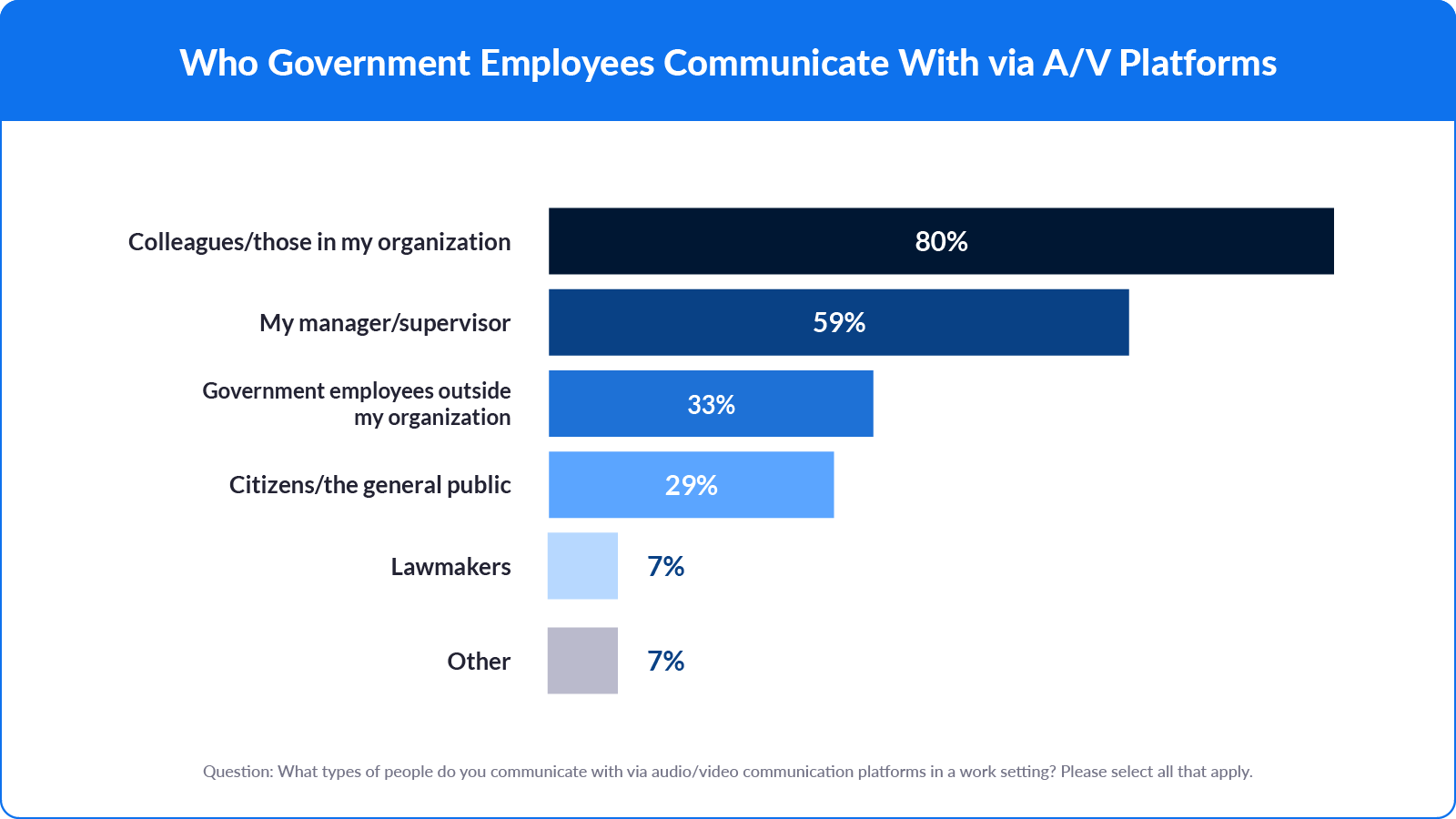 One minute government employees may be presenting to a live audience, the next they may be holding a highly confidential meeting. Tasked with a wide range of responsibilities, government workers in the digital age have developed preferences around which medium they prefer for certain communications. While phones and online chat are prevalent among the responses, those surveyed would prefer to utilize video communications for key government tasks when meeting in person is not possible.

When in-person communication is not available, most of the people surveyed prefer to use audio and video communications for hosting a webinar (81%), meeting externally with a high-level audience (80%), and presenting live to an audience (79%), while almost half rely on video conferencing for having a confidential meeting (47%). Phone comes in second for confidential meetings (40%), reflecting continued confidence in voice solutions. 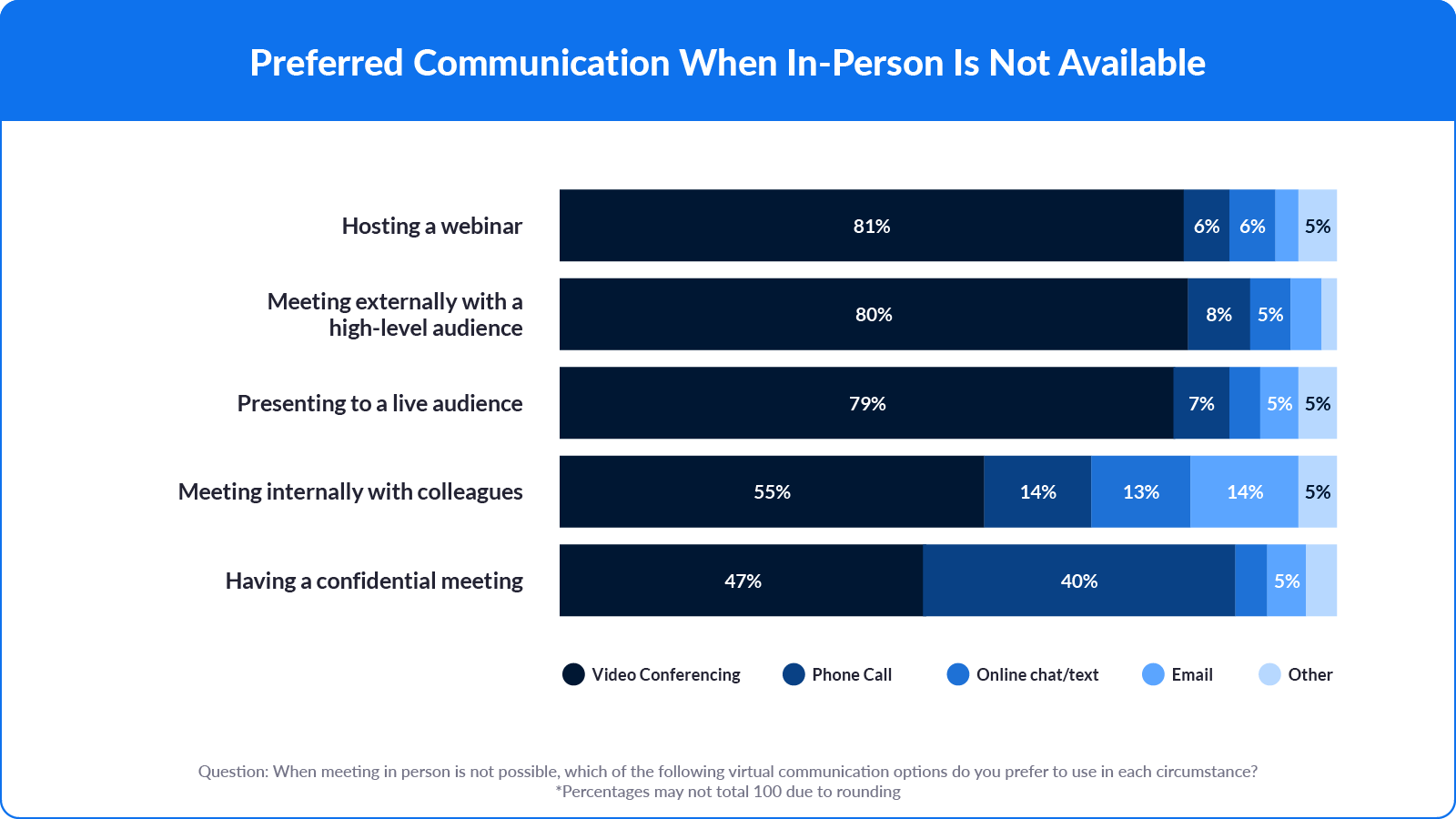 The benefits of video communications

It’s probably no surprise that the survey found that the majority of government employees surveyed feel that using audio and video communication tools when working remotely helps strengthen the way they work.

The research also shows that 79% of those government employees surveyed consider audio and video communications technology to be very or somewhat secure. Audio and video platforms follow closely after “Phone call using a landline” as the form of communication respondents perceived as secure. 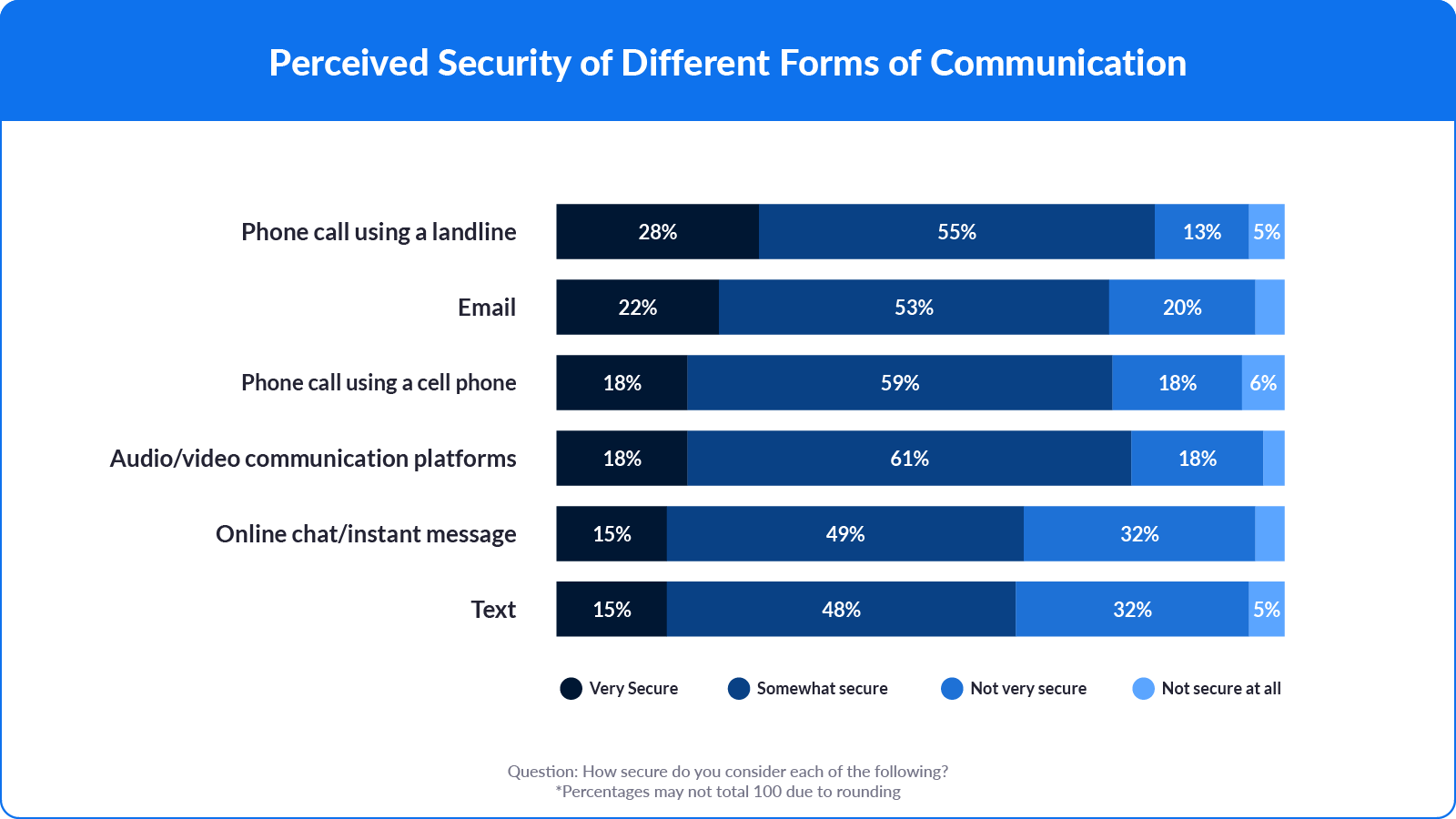 While video communications became more prevalent with the sudden onset of widespread remote work, the research demonstrates it’s here to stay. In fact, the majority of government workers surveyed (84%) see audio and video technology continuing to play a pivotal role in their line of work in the future, with many believing it will impact their specific job function in the future as well (77%).

Its longevity could be chalked up to a few key aspects, but accessibility is likely one of the key reasons audio and video communications have a foothold within the public sector. The Morning Consult survey revealed 72% of respondents believe audio and video communication platforms make it easier for everyone to contribute to the conversation equally. 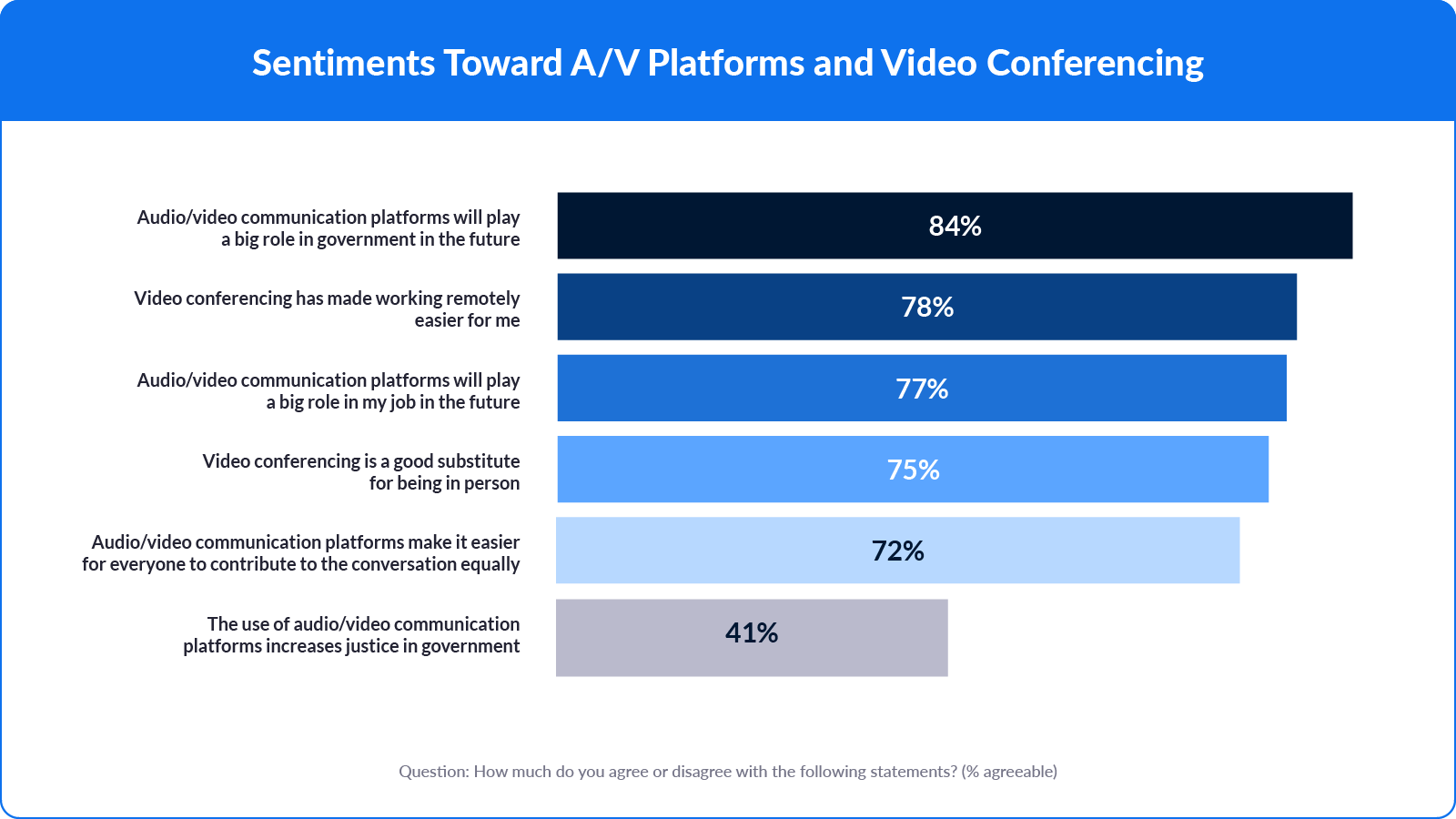 The Morning Consult findings revealed that 87% of respondents felt favorable toward Zoom. 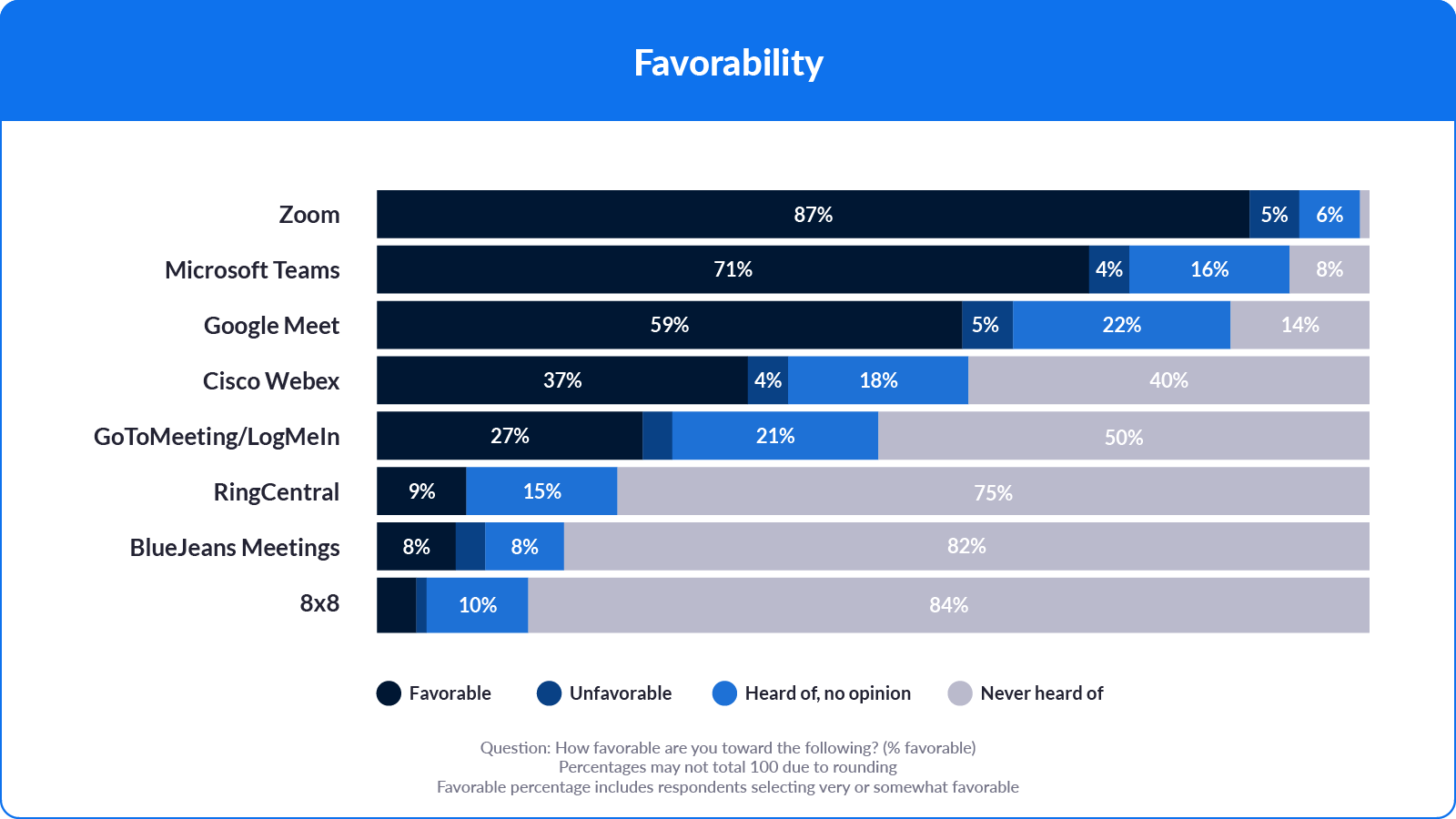 Now, what’s driving government workers’ favorable opinion of Zoom? Is it because it’s better for hosting a large meeting or webinar, its recording capabilities, or even its whiteboarding feature? Survey says: all of the above, and then some.

Respondents believe Zoom performs better than other platforms included in the survey on certain key capabilities — all of which were included in the Morning Consult study, in fact.

Fifty-five percent of respondents like to host large meetings on Zoom. Fifty percent like using Zoom to record meetings, 46% prefer Zoom for screen sharing, and 45% like to use Zoom when splitting meeting attendees into smaller groups. 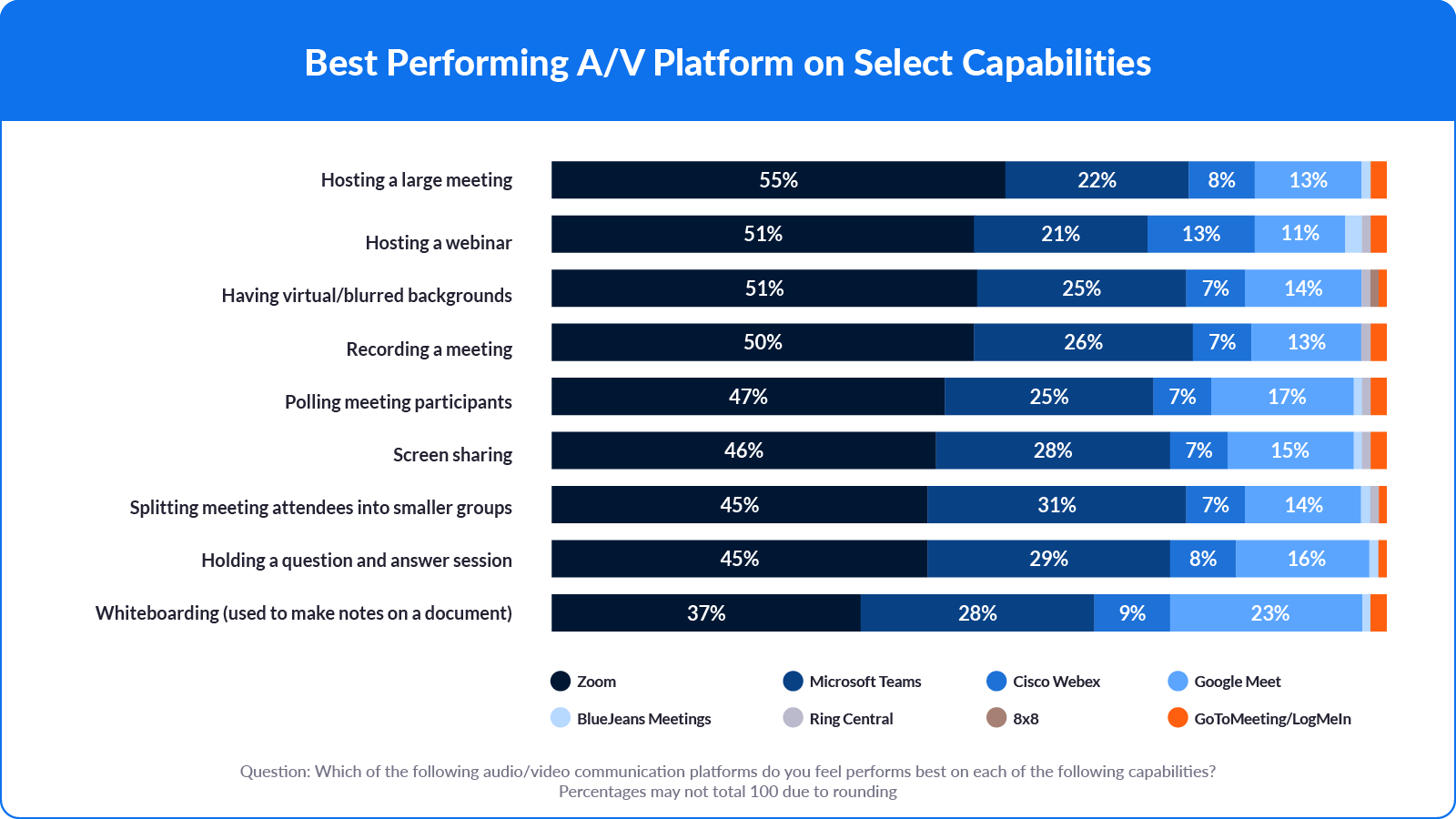 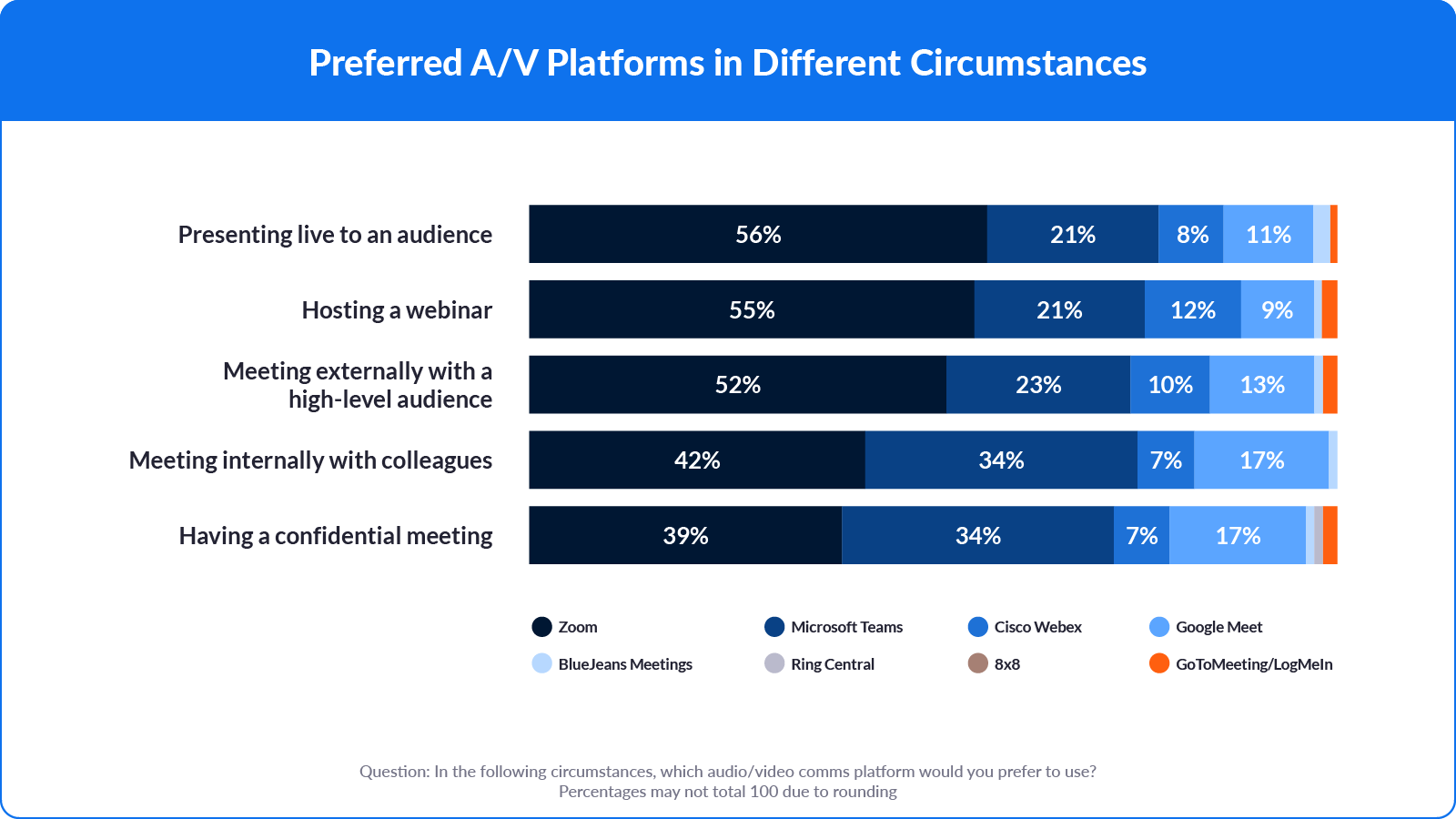 It’s fair to ask why government workers prefer Zoom for various capabilities as compared to other platforms included in the survey. Respondents who preferred Zoom described the platform as “user-friendly” and “reliable” and known for its “familiarity” and “helpful features.” ¹

Knowing why surveyed government employees prefer one platform over another requires an understanding of what they look for in an audio and video communications platform. Those surveyed were asked which three attributes from a provided list were the most important to them. “Easy to use” emerged at the top, with 52% of respondents selecting it as the characteristic most important to them, followed by: 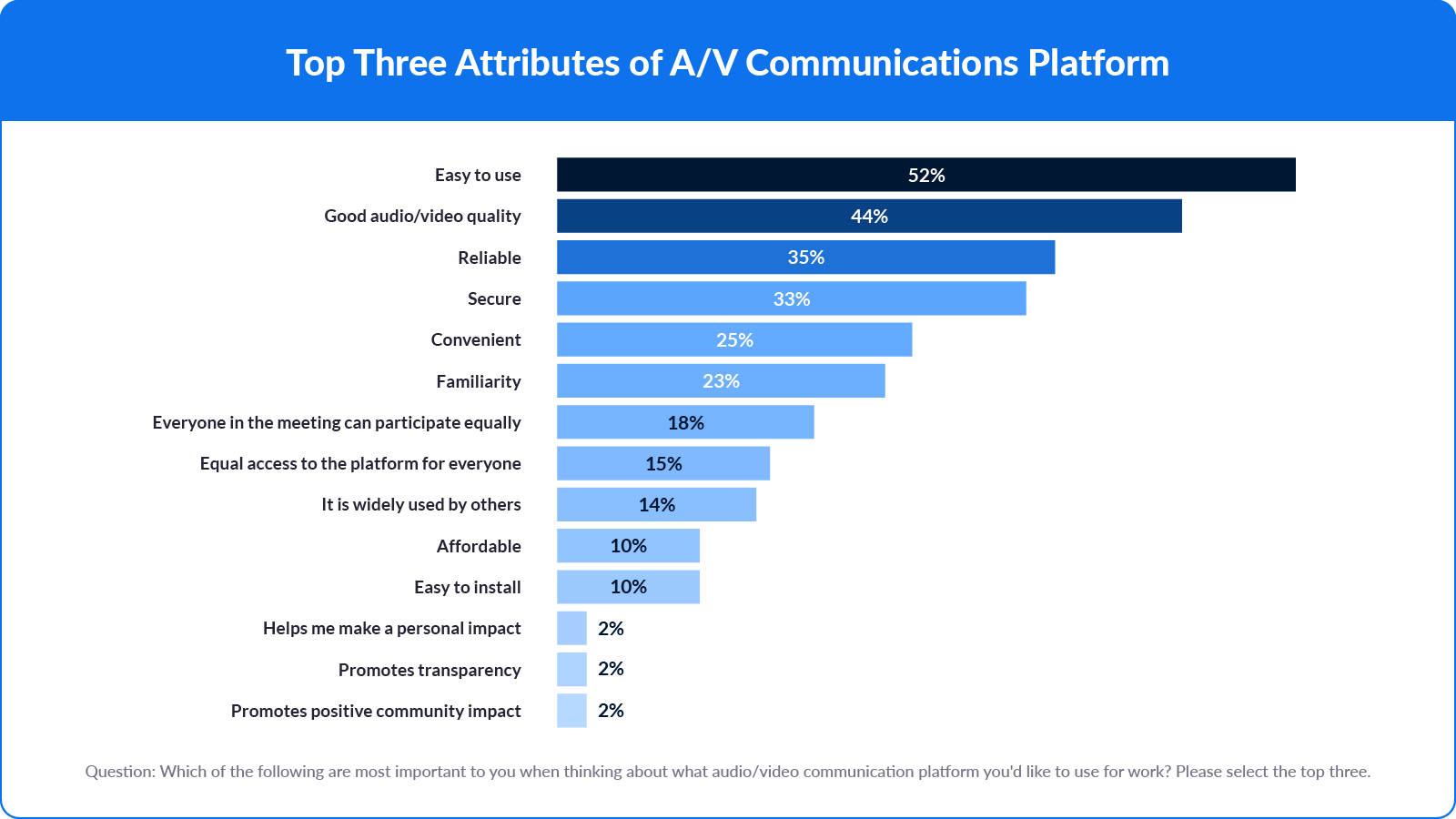 When compared with other platforms included in the survey, more respondents agreed that Zoom has these important traits across the board. The majority of respondents believe Zoom is easy to use (91%) and helps users to make an impact (64%).

The research also reveals how accessibility can potentially inform solution adoption. Eighty-four percent of respondents believe Zoom allows everyone in the meeting to participate equally and 80% think it allows equal access to the platform for everyone. Comparatively, 64% and 62% of respondents think the same for Microsoft Teams, 62% and 59% for Google Meet, and 54% and 50% for Cisco Webex. 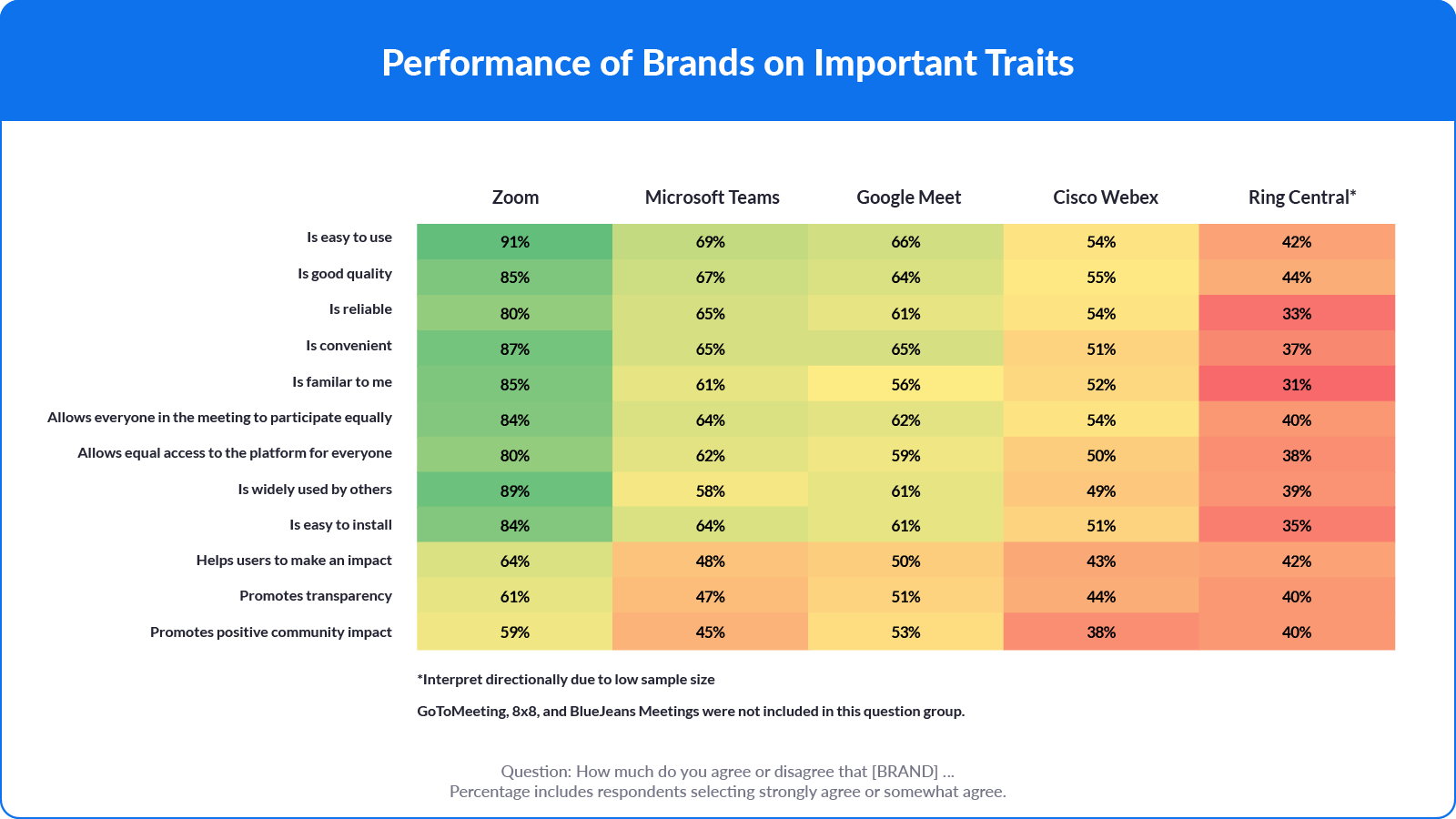 Respondents would select Zoom at work

We asked those surveyed which single audio and video communications platform they would choose to use at work if they could. For 47% of the survey respondents, the answer was Zoom, as these respondents chose it over Microsoft Teams, Cisco Webex, and the other platforms included in the survey. 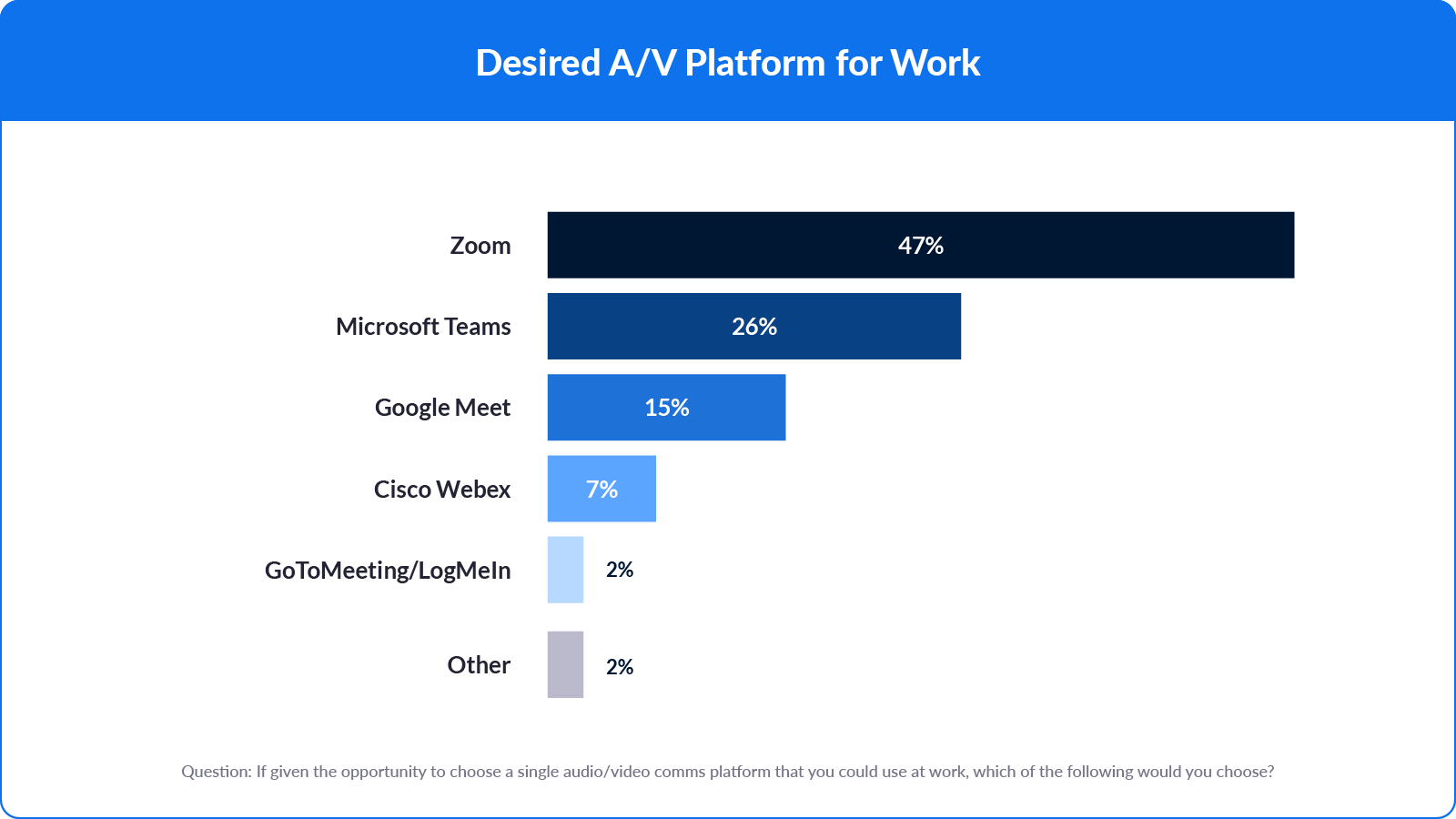 Government workers have an opinion, and it’s important leaders factor employees’ preferences into their decision-making when selecting audio and video solutions. As we enter an era defined by employee experience, strategic solutions are the key to unlocking a people-centric workplace. Whether agency workers are at home, in the office, or a mix of both, leaders should prioritize creating a workspace defined by technology tailored to employees’ needs, not the other way around.

As agencies enter into a digital reality, partnering with providers like Zoom helps the government enable a better experience for employees. Zoom provides industry-leading video, chat, phone, and workspace solutions to help your agency embrace a new era defined by innovation and ingenuity.

“Zoom’s Impact in Government” survey, conducted between November 5 and November 13, 2021, of 300 United States federal, state, and local government employees who reported using an audio and video communication platform for work at least once a month. Where comparisons were sought, those surveyed had sufficient familiarity with Zoom and competitors to make the comparisons. The data was unweighted, and Morning Consult used quotas to approximate the composition of the audience. The margin of error for this study is +/- 6%.

01
The popular way to collaborate? Video