When you’re crossing boundaries and borders, and people are sharing and creating this raw, vulnerable space, suddenly, Zoom is the most humanizing tool there is. It creates a space where anything is possible because it’s so accessible.

When you’re crossing boundaries and borders, and people are sharing and creating this raw, vulnerable space, suddenly, Zoom is the most humanizing tool there is. It creates a space where anything is possible because it’s so accessible.

The COVID-19 pandemic left many of us yearning for deeper human connection as an antidote to loss, loneliness, and social isolation. In the absence of physical presence, video has become a lifeline, a way to connect, share experiences, and even communalize grief and healing.

But as many of us know, replicating the spark that comes from being in the company of others can be quite the challenge in a digital environment. It’s not impossible, but when it happens, it can feel like lightning in a bottle — something special, but difficult to recreate.

So, how do you build a deep human connection over Zoom? Our customers have tapped into their creative potential and the power of technology to answer this question in different ways.

Some use the full spectrum of Zoom features, from polls and whiteboards to Breakout Rooms and filters, to engage with others. Some use augmented reality technology or composite images to create virtual spaces where people can sit side by side, even when they’re thousands of miles away.

But for Theater of War Productions, creating connection is an exercise in simplicity, in stripping down the Zoom experience to its core. There are no virtual backgrounds, in-meeting chats, or screen sharing. Their events are about the act of connecting and letting the ancient art of storytelling engage audiences around the world. 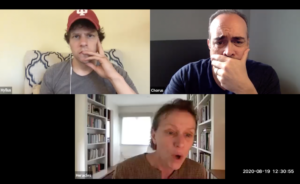 Theater of War Productions’ projects are part performance, part discussion, centering on complex societal issues like gun violence, mental health, and most recently, the pandemic’s impact on communities across the globe.

Typically, actors perform a dramatic reading of a Greek tragedy or contemporary work, then panelists and audience members openly discuss how the themes in the story relate to their lives and experiences. The conversations are often deeply personal; company manager Marjolaine Goldsmith said that many attendees describe the feeling of “bearing witness” to the grief shared by strangers.

When the pandemic hit and physical gatherings were no longer an option, Goldsmith and artistic director Bryan Doerries knew they needed to create a digital experience that was just as intimate, personal, and engaging as an in-person one.

“We wanted to get away from the consumptive quality of streaming. It needed to be omnidirectional — not just where the audience could hear and see the actors, but could be seen and heard if they chose to speak,” Goldsmith said.

They landed on Zoom’s webinar platform, which had the capacity, flexibility, and accessibility they were looking for. Attendees could virtually raise their hand and Goldsmith would be able to promote them to a panelist to participate in the discussion.

“We found we could bend Zoom to meet our values by disabling chat and allowing people to raise their hands and enter into a truly live dialogue,” Doerries said.

The power of communal connection

Their first virtual performance, “The Oedipus Project,” premiered in May 2020, drawing more than 15,000 attendees from 42 countries around the world. It featured scenes from Sophocles’ “Oedipus the King,” drawing a parallel between a pestilence plaguing an ancient city and the current COVID-19 pandemic. 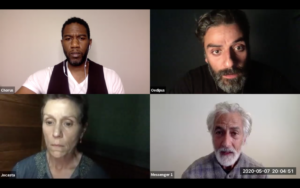 “We went into that first performance having no idea if it would work, but it accomplished something we only dreamed of doing prior to COVID, which is creating a space where the whole spectrum of people can be heard. It was a total paradigm shift,” Doerries said.

Forty virtual performances later, Theater of War Productions has reached every continent (including research vessels in Antarctica) and performed “The Oedipus Project” as part of the first Nobel Prize Summit to audience members in more than 80 countries.

A single performance often inspires hundreds of audience members to raise their hands for a chance to speak, and Goldsmith works behind the scenes to select 15 to 20 to hear from. She never knows who will be behind the camera or what they will say, but that’s part of the appeal of their productions, Doerries believes — a willingness to embrace the unknown and unpolished, from actors and audience members alike.

Doerries recalled a hospital custodian, a panelist for their Theater of War Frontline performance, joining the webinar from a janitor’s closet. “She was speaking to a global audience about the pandemic from the perspective of a person who cleans the rooms of COVID patients when they die,” Doerries said.

“There’s a gritty and beautiful realism to having Bill Murray in his bathrobe or Frances McDormand in a room that’s too dark, giving this powerful performance,” he added. “Then we open up the discussion and have an audience member calling from a homeless shelter. We’re zooming into her space and giving her the floor to speak.”

Evolving into the hybrid space

For Theater of War Productions, going digital wasn’t just a response to the pandemic — it gave them a new opportunity to connect people from all walks of life in ways that weren’t possible before.

“We could do a performance at a homeless shelter and hear insights from a group very close to the issue, then go to Lincoln Center later that day and do the same performance, but the possibility of those separate audiences sitting together and engaging simultaneously wasn’t ever afforded to us before,” Goldsmith said. “That’s the opportunity Zoom provides. It traverses boundaries we were trying to overcome.”

Doerries added, “We intend to never go back to how things were before.” Having shifted its model of engagement during the pandemic, Theater of War Productions isn’t done evolving — the company is in the process of reimagining its performances in a hybrid format through a project called the Digital Amphitheater.

With a $1 million grant from the Andrew W. Mellon Foundation, Theater of War Productions will “build” the Digital Amphitheater to expand its reach and explore new formats for hybrid events, which will involve performing in physical spaces like homeless shelters, prisons, and military bases, and broadcasting live to a global audience.

We’ll be hearing from communities very close to the issues we’re trying to address, and bringing those audiences into digital dialogue with people all over the planet via Zoom.

He and Goldsmith envision the Digital Amphitheater as a space where ancient and modern technologies combine to bring people together to have their voices and experiences heard.

“When you’re crossing boundaries and borders, and people are sharing and creating this raw, vulnerable space, suddenly, Zoom is the most humanizing tool there is,” Doerries said. “It creates a space where anything is possible because it’s so accessible.”

Our customers inspire us! See how organizations are using our platform to connect, communicate, and get more done together.

The Zoom platform helps bring more of WBD’s award-winning entertainment to your devices.

The key to providing a one-of-a-kind experience for millions of sports fans, music lovers, and families? Flexible communications.

How Zoom’s reliability and ease of use give Channel 4 the flexibility it needs to create seamless, professional...

The Old Vic in London transformed the theatre experience during the COVID-19 pandemic, creating live-streamed shows for global...

Toy and entertainment company Spin Master had to find a way to continue operations when its workforce went...