As IT, it is our job to promote up-to-date technology solutions that support our business needs in the short, medium, and long term. Zoom has accelerated our business transformation, enhancing our overall business performance, better user satisfaction, and lower costs.

As IT, it is our job to promote up-to-date technology solutions that support our business needs in the short, medium, and long term. Zoom has accelerated our business transformation, enhancing our overall business performance, better user satisfaction, and lower costs.

Construction is an old business in Egypt, but it would be a mistake to call it old-fashioned. New challenges, such as sustainable buildings and ambitious projects like Egypt’s Toskha Land Reclamation, aiming to turn the desert into agricultural land.

That’s good news for Hassan Allam Holding, one of the largest privately owned construction and engineering corporations in Egypt and the Middle East region. But the company faced challenges. The number of subsidiaries and projects was steadily increasing, from a local to a global footprint, spanning Africa, Asia, and Europe. Employees, while working in the office and abroad at construction sites, needed to be able to connect, share information, and collaborate on challenging projects.

Aly Kouriem, Group IT Director at Hassan Allam Holding, rose to the challenge. Hassan Allam Holding already successfully implemented Zoom Meetings and Zoom Webinars, so when it came to equipping its distributed workforce with modern cloud telephony, the company looked to Zoom Phone.

“As IT, it is our job to promote up-to-date technology solutions that support our business needs in the short, medium, and long term,” Mr. Kouriem said. “Zoom has accelerated our business transformation, leading to overall better business performance, higher user satisfaction, and lower costs.”

Mr. Kouriem and his team looked for a cloud-based phone solution that would integrate with the existing IP-based phone infrastructure and could scale to the company’s future needs. Zoom Phone ticked all the boxes, but one feature made it stand out: bring your own carrier (BYOC).

“Zoom Phone’s BYOC feature is really vital, as it affords distinguished flexibility for routing external calls and provides us with the opportunity to optimize and save external dialing costs”, Mr. Kouriem says. “Using a hybrid approach for our telephony services already promoted a high availability of our internal and external corporate dialing services, which notably improved our telephony services’ overall availability, reliability, and dependability.”

By using BYOC, Hassan Allam Holding could connect its users to local phone carriers, even if they are not one of the 45+ countries with native Zoom Phone support. It also allowed the company to keep its current PSTN service provider and established contracts while enjoying all the benefits and features of Zoom’s phone solution. 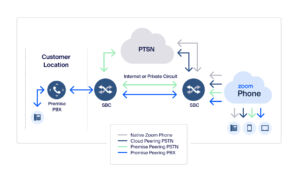 While Mr. Kouriem and his team were able to deploy Zoom Meetings and Zoom Webinars themselves, they turned to a partner to upgrade their phone network. They tapped Arkan Integrated Solutions, an established Zoom partner in Egypt and the Middle East, with help during deployment. The task? Connect 2,000 users via Zoom Phone, while still coexisting with Cisco’s IP-based telephone structure, without extended downtime. A critical part of rolling out Zoom Phone was the interaction with Cisco’s existing legacy IP phone system since both systems need to run parallel.

“It took about one and half months of preparation, during which all basic Zoom Phone settings were configured,” Mr. Kouriem said. “Service licenses were activated, main integrations were performed, technical problems were solved, and required customizations were implemented. Parallel, we created training materials for users to raise awareness.”

The preparation phase laid the groundwork for the coming switch. Working with both Arkan Integrated Solutions and the Zoom team, Hassan Allam Holding set up the service and securely connected the existing infrastructure to Zoom.

“Working with a professional partner during various project phases was one of the key service enablers and success factors. Arkan Integrated Solutions was a cornerstone that supported our team remarkably through swiftly achieving various project milestones and smoothly overcoming obstacles,” Mr. Kouriem said.

When it came time to switch, Kouriem’s dedicated team proactively worked to prepare the organization for the move to Zoom Phone by:

The earlier planning and preparation paid off, it paved the way for a fast switch with minimal interruption. Mr. Kouriem said: “Going live took about one week, which was really impressive. It went on time as pre-planned. Especially since Zoom Phone is user-friendly, which contributed enormously to accelerating service promotion over all our business users.”

The switch to Zoom Phone was finished in early September 2022. Hassan Allam Holding’s teams are now using the Zoom platform as their daily driver to facilitate high-quality voice and video calls. Together with other Zoom products, like Zoom Rooms, Zoom Meetings, and Zoom Webinars, Hassan Allam Holding is already reaping the benefits of Zoom’s unified communications platform. Voice calls and video conferencing reduced the total travel expenditure by 30%, while users around the world were able to collaborate more easily. Compared with other solutions, Zoom’s ease of use reduced service desk tickets by 35%, thus freeing up IT resources for other projects.

Besides collaborating in teams, Hassan Allam Holding has streamlined its way to train and inform employees. Zoom Webinars are quickly becoming a fixture in the company, with up to 3,000 participants joining virtual sessions to hear about relevant business news, processes, or upcoming changes. Zoom’s platform also helped the organization increase overall productivity by 27% and improve user satisfaction by 65%, internal polls showed.

The future is bright for the construction industry in Egypt and the Middle East. Building on the platform offered by Zoom, Hassan Allam Holding is ready to seize new business opportunities.

Our customers inspire us! See how organizations are using our platform to connect, communicate, and get more done together.

The Zoom platform helps bring more of WBD’s award-winning entertainment to your devices.

For a pioneering app that enables delivery and courier service in 1,500-plus cities, connectivity is everything.

Singapore nonprofit aims to make education fun, interactive, and relevant for the students of the 21st century using...

Zoom partners with DTEN to provide Olive Living with contactless entry, simplify staffing, and raise the bar on...

The key to providing a one-of-a-kind experience for millions of sports fans, music lovers, and families? Flexible communications.